Arlington, Texas—The Decision Analyst U.S. Economic Index rose to 107 in October 2020, an increase of 16 points from the year’s low of 91 in April. However, the October 2020 Economic Index remains well below the January 2020 time period, by a deficit of 11 points. Economic activity appeared to be relatively strong in October as the U.S. economy continued to reopen. The rising Economic Index indicates that the U.S. economy will tend to improve during the balance of the year, but growth is likely to remain slower than the pre-pandemic pace. The Index tends to be a leading indicator of future economic activity, as seen in the past-20-year history of the Index shown below. 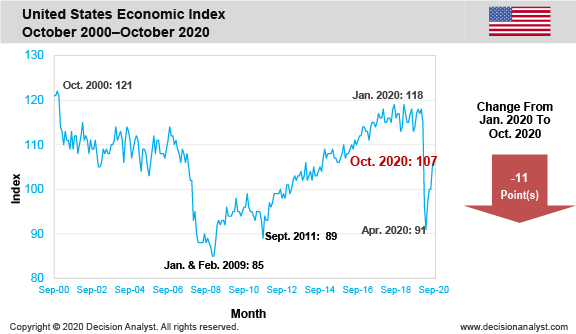 “The U.S. Economic Index continues to signal economic growth, but at a slow pace for the balance of 2020 and into 2021, assuming no additional governmental stimulus for the economy. If colder weather and the reopening of businesses and schools continue to fuel a huge surge of COVID-19 cases, the U.S. economy may really struggle this fall and into the spring of 2021. It’s possible that more government stimulus will be forthcoming, but the government stimulus (and the Fed’s ultra-low interest rates and its purchases of mortgages and corporate bonds) brings two major future risks: (1) massive speculation that misallocates U.S. resources (and we see such speculation already), and (2) runaway inflation. Once inflation soars out of control, the Fed will have to put on the brakes to control inflation. That will bring on the next recession. The U.S. government’s and the Fed’s choices are stark and limited. A growing risk factor is the probability of major business and corporate layoffs, once the government’s Payroll Protection Program expires. We are likely to see many layoff announcements by corporate America during the waning months of 2020," said Jerry W. Thomas, President/CEO, Decision Analyst.

“In Decision Analyst’s Economic Index survey, U.S. adults are asked to self-classify their employment status. They have to say they are ‘unemployed but looking for a job’ to be counted as unemployed,” said Thomas. “The U.S. employment picture has been improving for the past five months, but the U.S. unemployment rate remains at elevated levels, according to Decision Analyst’s tracking survey. In reviewing the Decision Analyst unemployment estimates, the October rate (8.7%) is slightly better than the previous 3 months. Hidden within the data is a downtrend in full-time employment and large numbers of women dropping out of the labor force, probably to take care of children who are schooling at home“, said Thomas.

“However, planned future purchases (see graphs below) continued, on average, to indicate that consumer spending (roughly 70% of the U.S. economy) is likely to remain reasonably stable for the balance of 2020 and into 2021. The graphs below show the percentage of U.S. households who say they are likely to make various types of purchases in the next 12 months.” 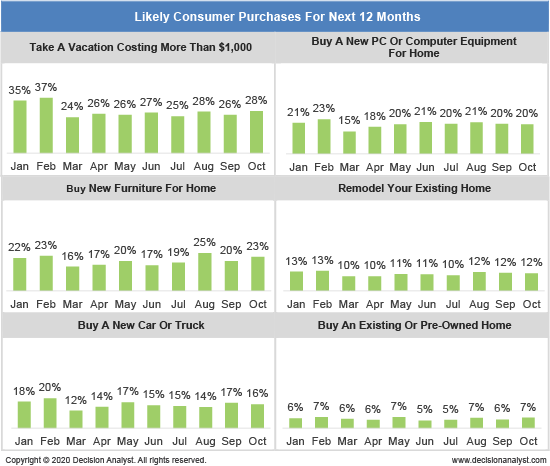 "The future-purchase-intent results in these charts continue to suggest that people are working to make their homes more comfortable. Intentions to purchase new furniture for the home and new computer equipment, remain at elevated levels. Subdued travel and vacation plans indicate more pain and suffering in the hospitality industry (hotels, restaurants, entertainment venues, airlines, etc.). Car and truck sales are starting to show some signs of life, while future sales of existing and new homes remain positive. All together, these graphs point to continued and modest growth in the waning months of 2020 and the start of 2021,” said Thomas.