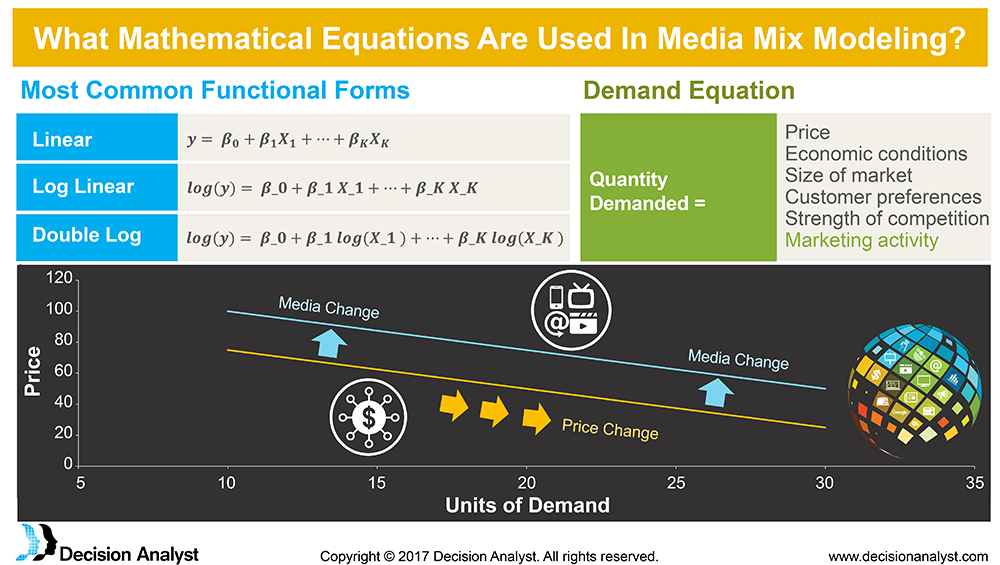 Today we’re going to talk about the equation that’s used for media mix modeling. To begin the discussion, we should understand that what we’re doing is building on top of the demand equation, and as you remember from your Economics 101 class, a change in price causes a movement along the demand curve.

When we add media activities to this demand equation, media variables, what we’re doing is we’re causing, we’re measuring how much the demand curve is shifting up and down due, to due to the media activity. The type of equation used could be linear or nonlinear, and the three most common equations used in media mix modeling are the linear function (the linear equation), the log-linear, and the double-log-function equation. So each one of these three equations can be used, but they each have different assumptions embedded within them about how media activity impacts sales. With the linear equation if you have an increase of 10 percent of media activity, the impact on sales, the percentage impact on sales, is different depending upon whether you’re starting at a 100 GRPs, for example, or starting at 200 GRPs. The impact would be greater in terms of the 10% increase in media activity, in terms of a percentage increase on sales when you’re at 100 than when you’re at 200 GRPs.

On the other hand, with the log-linear equation the assumption embedded within it is that a given unit change in sales, like 10 GRPs would have the same percentage impact on unit sales; the given unit change in GRPs would have the same impact on unit sales regardless of where you are on the demand curve, whether you’re at a 100 GRPs or whether you’re at 200 grps, you know, the impact on percentage basis is the same.

With the double-log function it assumes that the percentage impact on unit sales of a given percent change in GRP (or any kind of media activity) is the same. So a 10% increase of GRPs would cause a 10% change in demand, for example, regardless of where you are on the demand curve or in the equation itself.

So any one of these three equations could be used with media mix modeling. If we’re pooling data across brands and across markets, where the differences in the unit sales are great between the brands and the markets, it’s often advantageous to use the double-log or the log-linear function and so any of these can be used, but there could be different reasons for using the different ones.