Good morning, this is John Colias of the Advanced Analytics Group at Decision Analyst with our Media Mix Minute. Today we’re going to talk about what data is needed for media mix modeling. 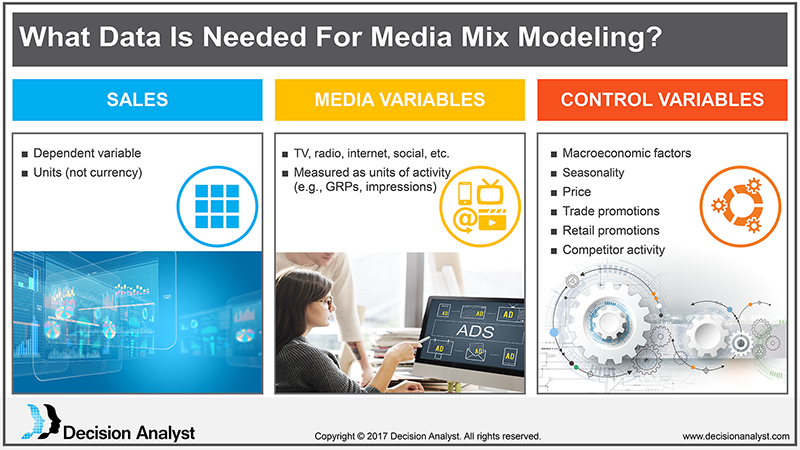 The media variables themselves are, of course, the second most important thing which we’re trying to measure, to use to measure, the impact of the media activity on unit sales, and these media variables as well should be measured in units. So we mean units of activity. Again not of currency, like dollars spent on TV advertising, but, in, for example, with TV advertising, gross rating points, and gross rating points would be a measure of reach times frequency. So, for example, if you have 50, if you reach 50% of your audience with an advertisement, and you run this advertisement three times—3 x 50 is 150, and 150 GRPs are the units of activity. And so we want to measure these media mix, media variables in terms of units as well.

And then finally we need to have control variables because, as we’ve mentioned in prior episodes, in order to properly measure the impact of the media activity on the unit sales, we need to control for those other things that impact sales, and those would be things like macroeconomic variables. If it’s a consumer good, it would be variables such as personal income or disposable income. And then it’s very important to control for, for promotions and for both retail and trade promotions. Anyone who has looked at the data for the impact of retail trade, retail promotions on retail sales could, you would see (and they have seen), that there’s big spikes in the data. When there’s promotions, there’s spikes and sales because people wait for those promotions. If we don’t control for that variation, then it’s very difficult to measure uniquely the impact of the media itself. So these essential variable components are needed: the sales data, the media data, and the control variables—and again sales and the media variables need to be in units not prices.