Hi, I’m John Colias, Senior Vice President of Decision Analyst’s Advanced Analytics Group, here to talk to you today about taking segmentation to the level of geomapping and micromapping.

In order to do this, we assume, first of all, that the segmentation has been a typical segmentation study, using survey data, segmenting on needs, behaviors, a variety of different survey questions, and possibly some external data that’s been brought into the survey data, as well. The key to doing this is in three stages. First is data fusion, then predictive modeling, and then the geographic projection, itself, [to do the] geomapping and the micro mapping.

The data fusion part is really all about having an address for each individual survey respondent, each individual record of that has been assigned to a segment, and then using that address in order to merge in external data. Now, an ideal dataset is the American Community Survey, which is offered by the Census Bureau, has thousands of variables both in the area of population demographics and in terms of housing, as well, housing data.

And additionally, other external data could be brought in that might [be related] to lifestyle segmentation, psychographic behavioral segments, behavioral data, that’s brought in at the individual respondent level, as well. So that data fusion part is the first step. 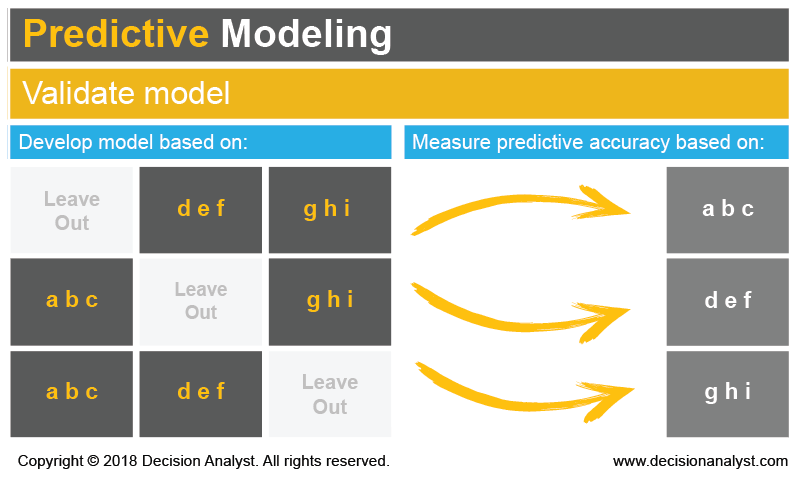 And it does this by using best practice machine learning techniques, splitting your data into training data and test data, training your model in such a way that you avoid overfitting the predictive model to the training data, so that it can predict extremely accurately [to] test data, data that’s not used to train the model.

And then, the final stage is to do geographic projection. And the projection itself, what we want to do is to take this predictive model that we developed and be able to predict down to as small a geographic area as possible. Now the Census Bureau offers a geographic area that is known as the block group. There’s 220,000 approximately block groups in the U.S., as an example. And so, if the goal is then to project the dominant segment, and the percentage of each block group down to each one of these 220,000 different geographic areas. Now, if the desire is to produce and to use the segmentation down at the zip code level, these census block groups can be aggregated back up to the census, to the zip code level as well.

And then finally, there’s a stage [that] can be very powerful, where you can take the data and interactively look at the data, observe the data, at the micro mapping level, so that you can go down to the ground level and see what the concentration of the segments are interactively in a map. You can click on a segment name and then you can look at the map and see what the concentrations of the segments are at the ground level for strategic and business purposes.

Please Note: In this next part of the Transcript John is showing in the video, an example of a deliverable that can be provided to clients when using geomapping for segmentation. A screen shot of the ‘American Dreamers’ Segment that John mentions in the example deliverable is shown below.}

Here’s an example of choosing a different segment, ‘American Dreamers’ is the name we made up for this example, and applying it in Dallas County. So what’s actually happening is the model is being deployed, by taking the information variables that are at the block group or in this case census tract level, plugging it into the equation, in order to display and project the concentration of the segment by census tract. Of course this can be done at the census block group level which is what we typically do. And the data that is used to train the model, maybe just for a few block groups or census tract, but we can deploy the model and display geographically to all the census tracts or block groups in the nation. 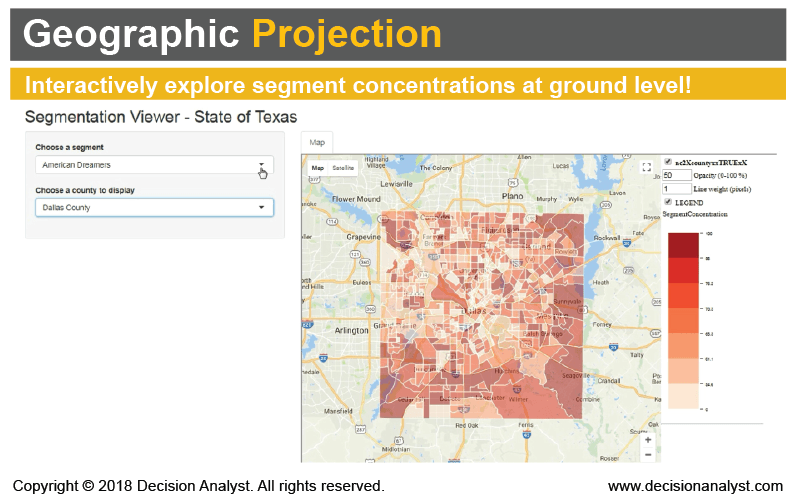 And here’s the final example choosing a different segment, ‘Intelligencia segment’ in Denton county. So that’s all about segmentation and micro mapping and geo-mapping with segmentation data. Our next episode will be applying segmentation results to your strategy and market position. Thank you.

If you would like more information on Market Segmentation, or if you have any questions, please contact John Colias by emailing jcolias@decisionanalyst.com or calling 1-817-640-6166.