It’s Not Always Your Fault. . .
Measuring The Impact Of Economic Factors On Consumer Satisfaction And Pricing Perceptions
by Joel Mincey

Well, take heart. . .it is not always your fault. As the following analysis will show, external economic factors like consumer confidence, inflation, and interest rates can (and do) impact how satisfied consumers are.

Consumer satisfaction and perceptions are complex, difficult metrics that store managers are judged on constantly. How do you keep consumers satisfied and positive in a marketplace filled with negative economic news?

While you can control many factors that influence consumer satisfaction and perceptions (e.g., clean store, easy-to-find items, responsive staff members, etc.), other factors are beyond the control of even the most attentive store manager. In this time of rising prices and uncertainty, it is helpful to understand what external market and economic factors (as well as what internal factors) are impacting the attitudes and perceptions of consumers.

Economists have struggled and theorized what impact consumer expectations play in the macroeconomic future of the markets. Since two-thirds of the United States economy is based on consumer spending, this is an area of interest with an enormous impact.

Now, you may be thinking that most consumers do not have the time or the inclination to examine these macroeconomic factors in enough detail for their results to impact their opinions and satisfaction about a brand (or brands) they use. Well, they may not understand the minutiae of modern economic theory, but they do talk with friends, family, and coworkers enough to understand what direction the economy is moving.

Our research has shown that some macroeconomic measures, particularly those that impact discretionary income, correlate very highly with consumer satisfaction and perceptions. The indicators that have shown to correlate best with consumer satisfaction and perceptions are the following: consumer confidence, fuel prices, inflation, and interest rates. In short, these are the measures that accurately reflect the amount of discretionary income a consumer has to spend on a monthly basis.

Discretionary income is important because it represents what is left over after all the bills and expenses have been paid. When this income is reduced because other monthly costs have risen, the impact is felt immediately. Of late, gasoline prices and interest rates have gone up significantly, placing even more pressure on the monthly budget.

Just recently, former Federal Reserve Chairman Alan Greenspan warned that the sustained high energy prices were having a negative impact on the economy. And, as the Federal Reserve continues to raise interest rates in an attempt to slow the rate of inflation, mortgage payments and credit card payments will continue to increase. Higher fuel prices, coupled with increasing mortgage payments, are reducing the amount of money consumers have to spend monthly.

The data for our analysis comes from a tracking study of more than 800,000 retail customers over a twelve-month period. Each question concerning customer satisfaction and price perceptions is measured on a five-point scale. The customer satisfaction scale is from “very satisfied” to “very unsatisfied”; the price perception scale is from “strongly agree” to “strongly disagree.”

The economic indicators come from a variety of sources including Decision Analyst’s Economic Index, as well as the United States Census and Bureau of Labor Statistics.

The Decision Analyst Economic Index is based on a set of nine-closed ended questions asked of a representative sample of consumers from our online panel, American Consumer Opinion®. This survey is conducted monthly and the data from it are used to calculate the Index.

A series of statistical techniques are incorporated to analyze the data and build the models used in the analysis, including correlation analysis and multiple regression analysis.

However, as we will see, external factors, beyond the control of the brand manager do influence how a consumer views a brand. In the simplest terms, when consumers are squeezed financially, their displeasure spills over into sometimes unrelated areas. Currently the two areas where consumers are squeezed are fuel prices and adjustable rate mortgages. These two items have increased the amount of money consumers must spend every month, thereby decreasing the amount of disposable income available.

In addition, consumer confidence and inflation are two broader measures that also impact consumer satisfaction. Consumer confidence, an index score based on survey questions asked of consumers, and the Consumer Price Index (a measure of inflation) are closely related to how satisfied a consumer is.

Consumer confidence is, in turn, heavily influenced by the increase in prices. Consumers feel less able to provide for their families when they see prices of everyday goods (especially commodities like food and energy) rising constantly. The lower consumer confidence falls, the more overall consumer satisfaction falls with it. 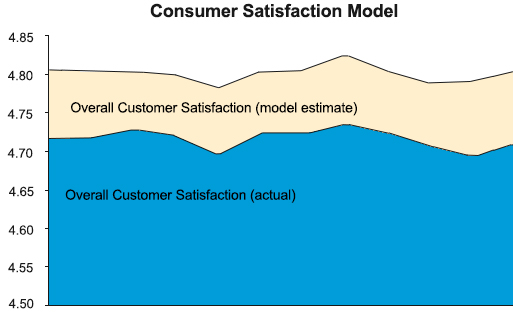 An increase in the price of a good or service is immediately felt (in most households) and must be accounted for in some manner: increase in spending, decrease in saving, increase in debt, or a choice to not purchase that product or service. Ironically a brand or retailer that is striving to improve or even maintain consumer satisfaction could see its efforts undermined by macroeconomic factors in the marketplace, over which it has very little, if any, control.

Consumer price perceptions, like consumer satisfaction, are also influenced by external economic factors; in particular, the short-term interest rates of an adjustable rate mortgage and consumer confidence. As prices rise, as reflected in a rise of the CPI, consumers’ pricing perceptions about a brand, in particular the perception that “prices are competitive,” will decline.

This will occur even if the cost of that brand has remained the same. When squeezed financially, consumers tend to generalize about prices and assign negative perceptions across the board. In our analysis, consumers were asked how much they agreed or disagreed with the following statement: (retailer) prices are competitive with other retailers in the market. During the period of the study, the retailer did not raise its prices significantly (i.e., its prices remained in line with other retailers in the category). 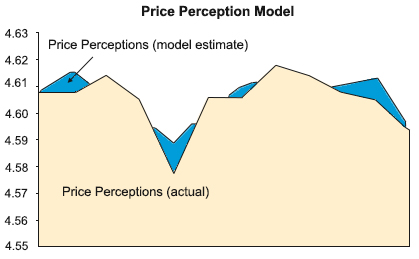 As the chart indicates, the model tracks very well with the actual consumer survey results. The model has an r2 of .654 and a standard error of +/-.0084.

So, what do you do with this information? It is a convenient scapegoat for when consumer satisfaction drops (without any real explanation). But more importantly, the analysis shows that looking at primary survey data is not always enough. We have to look at the influence of external factors on consumer perceptions and opinions.

As we have seen with the data and models presented, consumer satisfaction and pricing perceptions can and are influenced significantly by economic factors. By collecting and incorporating these data into your tracking database, you can create the possibility that the next time consumer satisfaction and perceptions fall unexpectedly, you have the opportunity of saying. “but hey, it’s not always my fault!”