In the early 1990s, applications of the joint revealed preference and stated preference (RPSP) model was investigated by Ben-Akiva and Morikawa (1990)1 and Adamowicz, Louviere, and Williams (1994)2, among others. More recently, the RPSP model has been applied within the realistic context of individual customer heterogeneity (Brownstone, Bunch, and Train 1997)3.

In this case, revenue is predicted to fall from $10 million to $9.4 million. In fact, revenue would actually increase $10 million to $10.5 million. This example illustrates the potential value of calibration. If the business were to maintain price at $50 as suggested by the uncalibrated choice model, then potential revenue would be lost. Choice model calibration could prevent this poor pricing decision.

Choice models estimate the worth, or utility, of each part of a product. Three important parts of a product are brand, features, and price. So, for example, the total utility for a $2.00 bottle of Heinz ketchup would be the sum of part-worth utilities for brand name, type of bottle, and size of bottle minus the worth of $2.00.

All of these calibration approaches have as their goal to increase the accuracy and reliability of market share and revenue predictions from choice models.

Adjusting only the brand part-worth is the type of calibration that is simplest to execute. Orme and Johnson (2006)4 term this approach "individual-level utility adjustment." This type of calibration forces the choice model simulator to predict target market shares for a particular scenario. The current market is usually the ideal scenario as a source of target market shares. It is important to realize that calibration of the brand part-worth does impact price sensitivity. 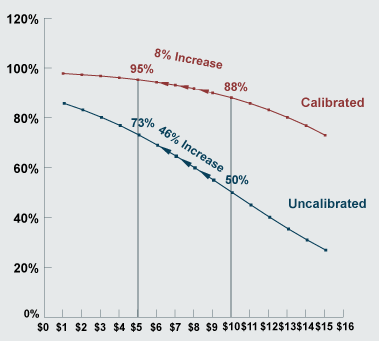 The first step in adjusting brand part-worth is to obtain target market shares for a particular scenario. The second step is the calibration itself, which can be accomplished by applying an iterative procedure that repeatedly updates a brand calibration factor and checks for convergence to the target market shares until convergence is achieved. Train (1986, 104-106)5 explains the iterative procedure.

Calibration can also be implemented by solving a system of simultaneous equations, where each equation predicts market share for a brand. If there are, say, three brands; then, there would be three equations with three unknown brand calibration factors. The solver routine in Microsoft Excel can be easily adapted to implement this procedure and solve for the three calibration factors.

The second approach to calibration is to rescale price and feature part-worth utilities by a constant scaling factor. A relative scale factor, for survey vs. actual market, of less than (or greater than) 1.0 reduces (or increases) the impact of price and feature changes on market share.

A below-one relative scale factor results when respondents are more certain about their survey purchase decision than they are about real-world purchase decisions. For example, when a brand price drops, survey respondents may be certain that competitor brands do not also drop in price, simply because they are provided with a complete set of competitor prices. In the actual market, where competitor prices are often unknown at the point of purchase, customers are less certain about buying the brand with the price drop.

In order to both match target market shares exactly for a base scenario and rescale part-worth utilities, the joint revealed preference and stated preference (RPSP) model was developed in the late 1980s by Ben-Akiva, et. al. (1994)6. Brownstone, Bunch, and Train (2000) applied this approach in a more complex model that estimates individual-level price elasticity. Recently, Decision Analyst developed a Hierarchical Bayes RPSP model (2007)7. Gilbride, Lenk, and Brazell (2008)8 developed a new approach to calibration using the "Loss" function, the theoretical staring point for Bayesian models.

Calibration of survey-based choice models can make a substantial difference in predicted demand and revenue resulting from price changes. Calibration of brand part-worth utilities based on in-market data such as that derived from store scanner data can deliver more accurate measurement of price elasticity and better market predictions of demand response due to price changes. A Bayesian RPSP (revealed preference and stated preference) model was used to demonstrate that price elasticity should be calibrated downward in an OTC healthcare product category. Decision Analyst's Bayesian RPSP model not only calibrated the average market price elasticity downwards (in absolute value), but also shifted the distribution of estimated price elasticity, increasing the estimated percent of customers with low price sensitivity.