DAISurvey.com: Decision Analyst's website where we conduct all our online surveys. Only those respondents who are invited to a survey can log in to take that survey.

Data: The observations or measurements resulting from surveys, unit or dollar sales, and other types of measurement.

Data Collection Company: Sometimes called a Field Service Firm. A firm or agency that specializes in the data collection part of the marketing research process. These types of companies are usually responsible for hiring and training of interviewers, executing a client's job exactly as specified, field editing, and validating each interviewer's completed work.

Data Entry: The process of entering data from paper surveys into an electronic format.

Data Entry Mask: A data layout file set up and fitted to the questionnaire so that answer codes can be entered to create a data file.

Data Integrity: The quality or condition of the information in a database its accuracy, completeness, and validity. That is, data that has complete integrity is free of corruption by input, update, or programming errors.

Data Layout: Also referred to as Layout. A source document that lists the data storage locations for all answers to a survey.

Data Mining: The use of statistical and other advanced software to discover nonobvious patterns hidden in a database. Learn More

Data Processing: Typically refers to the coding and tabulation processes involved in marketing research studies. The term is also used in information technology to have a broader meaning that encompasses the processing of all data for a company.

Data Scraping: Also called Web Scraping: The process of searching publicly accessible websites such as blogs, social networks, and other sites where people post information about themselves (their interests and hobbies, their hopes and dreams, etc.) and then retrieving or scraping all the relevant information about a brand, product, or service.

Data Visualization Method: A method of presenting data in an easy-to-read visual format.

Database: A set of data stored in one location, generally, that can be accessed by users to retrieve the data and generate reports.

Database Management System: A software system and related hardware to store data in a database or data warehouse, and the software tools to access and analyze that data.

Database Marketing: Marketing that relies on the creation of large computerized files of customers' and potential customers' profiles and purchase patterns in order to create a targeted marketing mix.

Day-After Recall: Also, referred to as 24-hour recall. An advertising-testing technique that measures the percent of people watching a given TV program who recall seeing or hearing a TV commercial 24 hours after its airing. Same concept can be applied to radio commercials.

Decennial Census: The population census conducted by the U.S. Census Bureau every 10 years.

DecisionSimulator™: A Decision Analyst computer model that allows clients to play “what if” games by inputting various values for economic, business, and marketing variables. The results for each combination of inputs can be viewed instantly. This model allows hundreds of decision scenarios to be explored within a short period of time. Also known as a Marketing Decision Simulator.

Decision Tree Model: A data-mining tool and/or a decision support tool which constructs diagrams made up of (nonterminal) nodes at test/decision points and at decision outcomes (terminal nodes). The resulting tree shows all possible outcomes from an initial set of conditions, based on the assumed decision criteria. A "decision tree" calculates the expected values (or expected utility) of competing alternatives, and/or the conditional probabilities of outcomes. Algorithms for decision-tree analysis include CHAID, CART, and Random Forest Regression, among others.

Dedupe: A query process to identify and eliminate duplicate records in a data file.

Delphi Technique: A structured process to help a group of experts arrive at consensus. In the first step, the experts answer a question or predict the future individually and anonymously. Then, the group results (the averages) are shared with everyone, and the experts are asked to answer the question or predict the future again individually and anonymously. This process continues until consensus is reached.

Demographics: The characteristics of human populations, such as size, distribution, gender, age, education, marital status, type of housing, and income.

Demography: The study of the size, distribution, structure, characteristics, and migration of human populations.

Depth Interviews: One-on-one interviews (an interviewer and one respondent) to explore a topic in great detail or depth, typically involving nondirective and projective interviewing techniques to uncover subconscious or unconscious motivations. Learn More

Derotate: The process of reversing the rotations built into a study during its data collection phase.

Descriptive Function: The descriptive function of research is the gathering and presentation of statements of fact rather than of causal relationships.

Descriptive Statistics: Descriptive statistics measure and describe characteristics of groups without drawing inferences about the population in general. They summarize or profile a data set Examples include Measures of Central Tendency (Arithmetic Mean, Median, Mode), Dispersion, and Association.

Descriptive Studies: Research studies that seek to answer the questions who, what, where, when, and how.

Design Control: Use of an experimental design to control extraneous causal factors.

Determinant Attitudes: Those consumer attitudes most closely related to preferences or to actual purchase decisions.

Diagnosis: The search for the reasons, the causes, that underlie a given research finding.

Diagnostic Function: The explanation of data or actions.

Diary Panel: A panel of consumers who agree to keep a diary of their media consumption, product purchases, retail shopping, etc. over a period of time.

Dichotomous Questions: Questions that ask the respondent to choose between two "opposite extremes." For example, a respondent might be asked if she "loves" a given brand or "hates" that brand.

Diffusion Curve: A graphical and/or mathematical representation of the adoption rate for a new product or a new service. How long does it take a new product or new service to go from zero to its peak of acceptance and use? Typically, the curve has an S shape. Initially there are only a few early adopters, and then acceptance accelerates as the new product or service spreads. At some point, adoption tends to level off. Thereafter, acceptance grows slowly as the laggards join the parade.

Digitizing: The process of assigning latitude and longitude coordinates for each twist and turn of a market area that is to be studied.

Dips Or Waves: A dip is one wave in a tracking study. A dip is a survey to measure market variables at a point in time.

Direct Computer Interviewing: Interviewing accomplished by asking consumers to view questions and potential answers on a computer screen, and then enter the answers via the keyboard or clicks with a mouse.

Disappointment Score: The percent of respondents in a product test who say, after usage, that they will not buy the product.

Discrete Variable: A quantitative variable that can take only certain values within the range of the variable. The number of legs on a chair could be one, two, three, or four, but the number of legs could not be 2.5 or 3.7, for example. In contrast, a Continuous Variable can assume any value within its range.

Discretionary Income: The amount of money consumers have to spend, once taxes and necessities or essentials (e.g., rent, food, medical care, transportation, insurance) are deducted.

Discriminant Analysis: A regression-based multivariate technique to predict group membership. Discriminant analysis can be used to predict whether a consumer is likely to be a customer or noncustomer, based on demographic variables. Learn More

Discriminant Score: The basis for predicting to which group a particular object or individual belongs.

Discriminant Validity: The lack of association between two measures that are theoretically different.

Discussion Guide: Also, called a Discussion Outline or Moderator Guide. An outline of topics for the moderator to cover during a focus group session.

Discussion Outline: Also called Moderator Guide or Discussion Guide. The outline of topics that a moderator uses as a roadmap to guide a focus group discussion. The discussion outline is designed to provide information that will help solve marketing problems and/or help identify marketing opportunities.

Discussion Question: A question carefully crafted to provoke a discussion in a focus group, rather than a short, simple answer. Or, a question in a survey that asks the respondent to answer a question spontaneously in her own words (i.e., an open-ended question).

Disguised Observation: The process of secretly observing people, settings, or situations. An example would be a researcher eating at a restaurant while observing the behavior of surrounding customers and wait staff.

Disposable Income: The household income available for spending or saving after taxes have been deducted. (See Discretionary Income also.)

Disposition: The result of an attempt to reach or contact a potential respondent.

Disproportionate Sampling: The deliberate use of different sample sizes for various strata (or groups) within the sample. This can sometimes be used to reduce sampling error or to assure minimal numbers of certain types of respondents (for example, users of a particular competitive brand).

Disqualifier: An answer choice that makes the respondent ineligible to participate in the survey.

Distribution Check: Store visits to determine the number of stores carrying specified brands, along with the number of facings, special displays, and prices of the products.

DMA (Designated Marketing Area): A television market, as defined by Nielsen. A DMA is normally made up of a number of counties.

Document Templates: Word templates such as questionnaire templates, proposal templates, and report templates are programmed guidelines to ensure the consistency and accuracy of those documents within Decision Analyst.

Does Not Qualify (DNQ): A questionnaire instruction, typically used in screeners, to indicate the answer choices that disqualify a respondent from participating in a study.

Door-To-Door Interviewing: Consumers are interviewed face-to-face in their homes. This used to be the primary method of data collection in the U.S. up until about 1965 to 1970. Door-to-door is still the primary data collection method in many countries.

Double Byte (Unicode): A standard system for working with characters or text for all languages, including writing systems such as Arabic, Japanese, or Russian. Unicode is supported by most browsers, operating systems, and software languages.

Double Jeopardy: A term used in marketing to define the problem of smaller CPG brands tending to be bought both less frequently and by fewer people. Hence, the term double jeopardy.

Double Sampling: Sometimes referred to as Two-Stage Sampling. Typically double sampling involves pulling two samples. Results from the first sample determine if and how the second sample will be used (or not used).

Download: The process of transferring a file from the Internet to one's computer. On occasion survey respondents may be asked to download software, code, scripts, graphics, or video in order to complete an online survey. Generally, any type of download will reduce response rates. 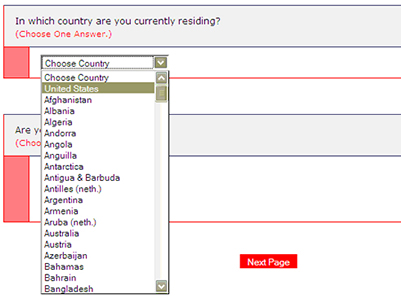 Drop Off/Out: A respondent who stops taking a survey before completing the Screener or the Questionnaire.

Duplicate Number Validation: A service in which the names and telephone numbers of focus group recruits are submitted to a company in advance of the groups. The company checks the recruits' addresses and phone numbers against their database of respondents' participation in other research projects and focus groups. The goal is to identify and screen out professional respondents.

Dyad: A qualitative interview consisting of a moderator and two respondents. The moderator guides the discussion, to ensure that each respondent has adequate time to talk. Sometimes this method is used to pair people holding opposing opinions. The dyad offers some of the same advantages as the depth interview, but with added stimulation from interchange between the two participants. Learn More

Dynamic Programming: Used in mathematics and computer science, dynamic programming is a method of solving complex problems by breaking them down into simpler, incremental steps. Optimal solutions are known as subproblems.

If you would like more information on Marketing Research, please contact Jerry W. Thomas by emailing jthomas@decisionanalyst.com or calling 1-817-640-6166.