A major manufacturer of a fresh food product sold in grocery stores had spent $250,000 in the previous two years on advertising and $1.2 million per year in promotion allowances. The company believed it understood how to manage promotion allowances and how much return to expect in terms of sales. However, there was a question about the return on advertising expenditures; that is, how much stimulation of sales could be expected per Target Rating Point (TRP) of advertising?

The client company was spending significant funds on promotion and advertising within one particular market (MSA), with the result being significant growth in that market. As plans were being made to expand distribution to other markets, company leaders were undecided about how much to budget for promotion versus advertising. Should less money be spent on promotion and more on advertising to generate growth in new markets? To the extent that promotion allowances are given to specific retail chains, should these be allocated evenly to different chains? Or should these allowances be given in larger amounts to particular chains?

The primary objective of this research study was to quantify the link between advertising, trade promotion, and sales. The quantification would determine how many additional units of product sales would be created by a given amount of promotion dollars for a particular product in a particular grocery store chain during a given week. Similarly, the study would quantify the additional units sold as a result of the quantity of advertising in a particular week.

A secondary but important objective was to develop a tool to maximize revenue by selecting the optimal mix of promotion allowance dollars across retail stores and products in the product line. In terms of advertising, the goal was to maximize the revenue increase by optimizing the mix of TRPs allocated to each product.

It was decided to focus the research on a particular market, a large MSA. Decision Analyst received weekly product sales/revenue data for the years 2007 and 2008, along with some ancillary/explanatory documents that included:

An Excel-based simulation and optimization tool was delivered to the client and it received high-level awareness at the global headquarters. The simulation and optimization tool assisted senior management in optimizing short-term return from promotion and advertising. Findings supported strategic decisions regarding the level and timing of advertising and promotional spending in various markets.

The client company sought suggestions for the next stages of research, such as how to expand the analysis to different types of markets and additional marketing media vehicles. 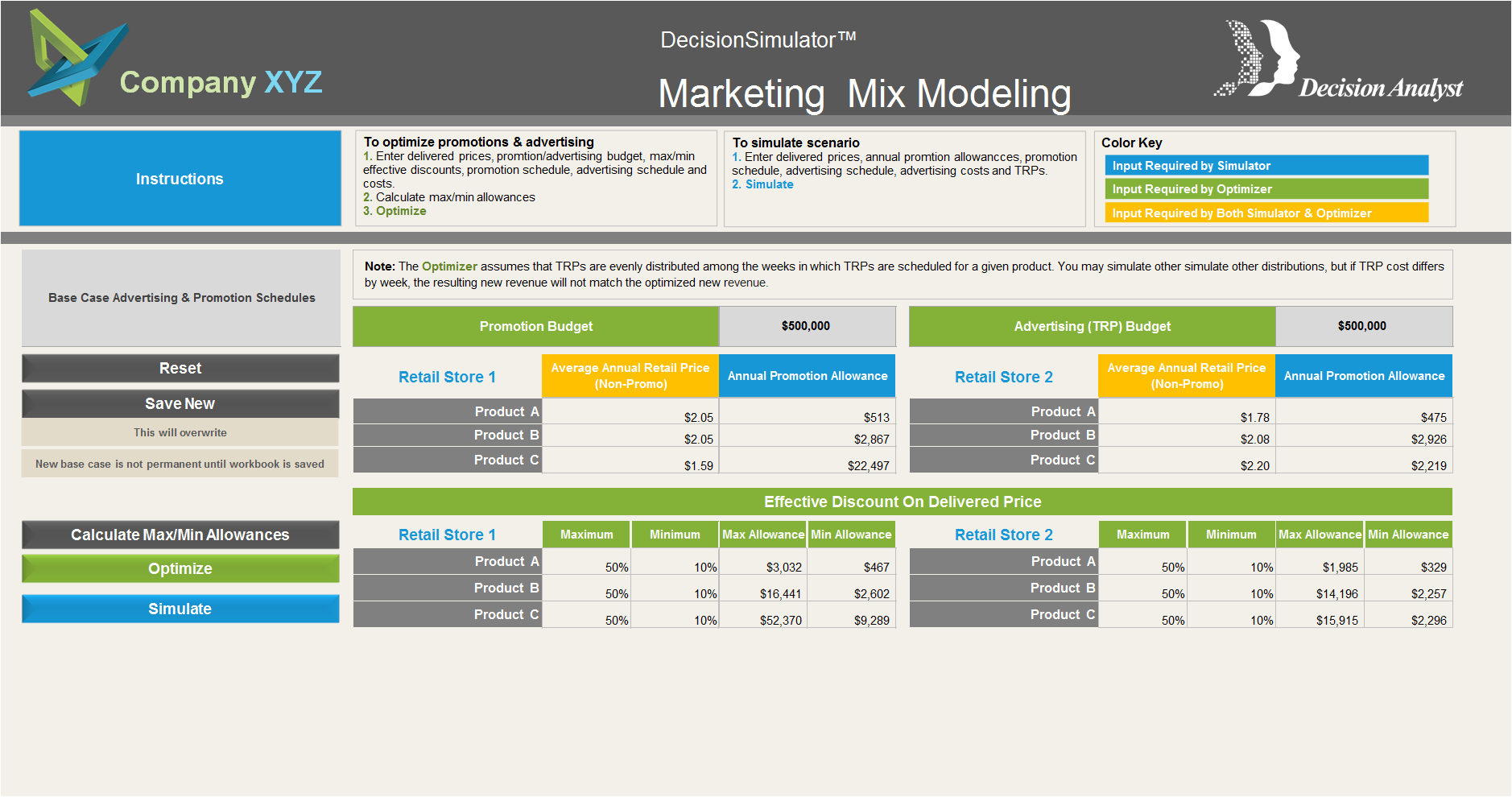 If you would like more information on our Analytical Consulting Services or would like to discuss a possible project, please contact Jerry W. Thomas, President/CEO, (jthomas@decisionanalyst.com), or John Colias, Senior Vice President and Director of Advanced Analytics, (jcolias@decisionanalyst.com), or call 1-800-ANALYSIS (262-5974) or 1-817-640-6166.