The Curse of the Target Market
by Felicia Rogers

How can we possibly define the audience this tightly when the product itself is not even developed yet? Sure, new product efforts should begin with a target audience in mind. “How can we meet a need for busy moms?” “What could we bring to market that would attract customers away from competitor X?” But even these efforts deserve a broad investigation—and open minds—in the early stages. What if this new product doesn’t resonate very strongly with the $75,000+ income, luxury SUV-driving crowd, but it would sell like hotcakes among $55,000+ income, compact SUV drivers? We will never know.

This is what I call the curse of the target market: When we get so focused on the target—which is actually the framework we would use for buying media—that we forget to explore the rest of the potential user base to see if anyone else falls in love with the new product. In order to avoid falling into this trap, it’s best to follow a funneled approach to new product concept assessment. 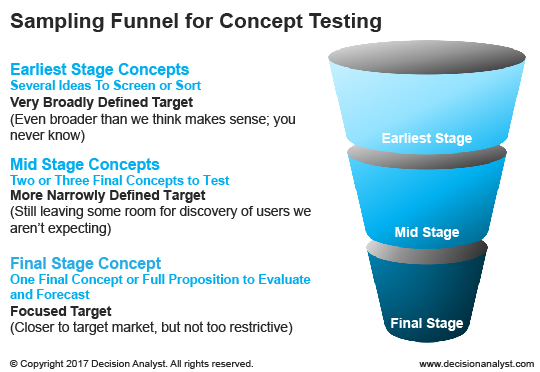 This approach fits nicely into most Stage Gate or Design Thinking processes.

Early on, true exploration can and should occur. The product ideas developed with one audience in mind may be very appealing to that group. And they may appeal to consumers who are similar to them. They may also resonate with very different consumers. If we tested these early ideas only among the narrowly defined target audience, we could be leaving market share and money on the proverbial table. Worse, we might be rejecting an idea that failed to reach certain scoring thresholds among the originally-intended audience, but may be a stellar performer among the ignored audience. This may be the most critical stage for open minds: allowing for broad sample (target audience) definitions for researching. Exploring from this 30,000-foot level gives the R&D group, brand managers, and anyone with NPD responsibilities a better chance to succeed.

From there, the further you go in the development process, and the closer you get to a final product (including packaging and other marketing variables), the more logical it is to narrow that testing target. Here is where we want to be sure that the product will appeal to the intended audience, in turn generating enough sales to make a profit. Even at the final stages, though, be careful not to be entrapped by the curse of testing new product concepts among the target market. Rarely does this do anyone any favors.