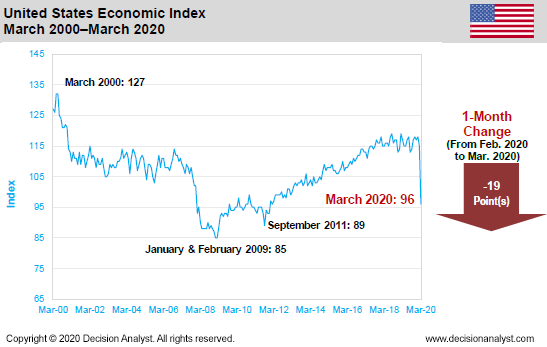 “As evident in the chart above, the U.S. Economic Index has varied some over the past two years, but has, on average, been relatively flat. That all changed in March 2020, as the U.S. Economic Index went into free fall. The March plunge was not limited to the U.S. Mexico’s Economic Index fell by 16 points. Canada’s Economic Index declined by 22 points. Mexico and Canada, of course, are major trading partners of the U.S. In Europe, Germany’s Economic Index plunged by 19 points, and the U.K. fell by 14 points. India’s Index fell by 18 points. These are huge, unprecedented declines, and they signal that recession has arrived almost everywhere in the world,” said Jerry W. Thomas, President/CEO of Decision Analyst. “The collapse of the U.S. economy in late March indicates that first-quarter economic growth in the U.S. will be close to zero or negative (despite approximately 2% GDP growth rates in January and February). The second quarter will see negative GDP in the U.S. and in most countries around the world. It is highly likely that the recession will begin to moderate in the second quarter, if COVID-19 can be slowed enough to re-open the U.S. and world economy,” said Thomas.

“What is really important in the U.S. (and elsewhere) is that businesses creatively respond to the crisis, modify business models as necessary, try to keep workers employed and productive, and begin planning to reopen the economy in May, if COVID-19 cooperates. A good example of creative response to the crisis is the rapid promotion of takeout and drive-thru sales by restaurants. Another great example is businesses stepping up to make medical masks, ventilators, and other medical supplies. The rapid response of pharmaceutical companies has been amazing, and more breakthroughs will come. Every business can, in some small way, respond creatively to the crisis. If all businesses take positive steps now, the recession will not be as deep or as prolonged. Let’s get to work.”